This will be a great way to get information out to the members without having to wait for a meeting or a newsletter. Those are still valuable tools but when the information is more time dependent, it is good to have another outlet.

With that in mind, I want to let you all know about a very interesting exhibit at the Clark Museum in Williamstown. The Clark is a terrific museum located in the Berkshires of Western Mass. It is loaded with works of the Impressionists and many American and European masters. Their main exhibit this summer is Picasso Looks at Degas. It runs until September 12, 2010. 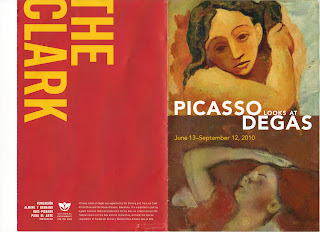 This is a very interesting exhibit. It shows a number of Degas' works of various subject matter such as cafe life, the theater, women bathing, etc. Juxtaposed with many of these works are Picasso's take on the same subject. Although Degas was much older than Picasso, they both lived in Paris at the same time at one point during their careers. Picasso would have seen many of Degas' paintings and may have been impressed or influenced by them. 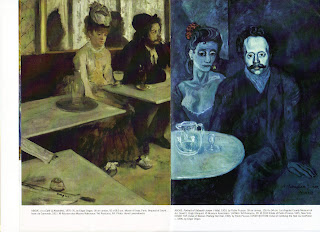 The time frame of the exhibit covers many years of Picasso's life and artistic styles. It was fun to see the development of Picasso's style as he copied some of the works of Degas. Picasso did say, after all, "Good artists copy, great artists steal". You can see how he followed his own advice at this fascinating exhibit.
Posted by Tony at 11:43 AM 1 comments

Hello members! We're looking for your information to make this blog a resource for you.

Please feel free to email foxboroart@gmail.com and include information you'd like to share. Particularly we're looking for members' website and members' blogs. Send it along and we'll get it posted as soon as we can!

Looking forward to publicizing you and your talented work!
Posted by Foxboro Art Association at 11:42 PM 1 comments

Here is a place to learn what's happening in the association and amongst our talented membership.

More information will follow, right now it was important to get the blog up and running!

Looking forward to many postings in the future. Hope you'll be checking in regularly!
Posted by Foxboro Art Association at 11:21 PM 0 comments

Board Members and their emails

Posted by Foxboro Art Association at 10:25 AM 0 comments

Email ThisBlogThis!Share to TwitterShare to FacebookShare to Pinterest
Labels: board members, foxboro art association
Newer Posts Home
Subscribe to: Posts (Atom)
Have an item for our calendar?