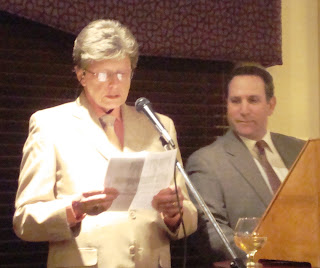 Thanks to the generosity of scores of local artists, the long awaited art auction to benefit the Boyden Library in Foxboro was a big success. Held Saturday night, March 26, at the Foxboro Country Club, the event entertained a crowd of more than 150, including more than 70 enthusiastic bidders. Preliminary figures show that more than $13,000 were bid on 53 works of art -- an amazing achievement. But it didn't start out that way as bidders cautiously started out seeking bargain-basement deals. But as the evening progressed, the bidders warmed up and became more and more aggressive. It didn't hurt that many of the bidders were some of the donating artists themselves. It also didn't hurt that co-auctioneers Bill Greider and Kevin Weinfeld (see above photo)did a masterful job of extracting ever higher bids while entertaining the crowd with frequent funny quips. The highlights included a winning bid of $1,050 for Jackie Canna's watercolor painting of "Founder's Day Parade" and $1,100 for Mark Perry's wooden sculpture "Curlew Decoy". In all, it was a fun evening which accomplished its primary mission of raising extra money for the Boyden Library. The Foxboro Art Association is proud to have participated in this effort as a way of thanking the Boyden for its many years of support.
Posted by FrancisX at 9:03 PM

It was a great evening. Well organized and terrific art.

Nice write-up and excellent job, Frank, of rounding up all the artwork for this great cause.